5G stocks will soon crash when Apple makes a huge announcement — but here’s how investors can still win big.

A game-changer that Apple has quietly been developing for years.

And this new wireless network is so advanced it will make 5G almost obsolete on arrival.

But it could turn into an absolutely MASSIVE win for savvy investors who see this “End of 5G” coming.

It all started when my research led me to a small document buried under mounds of other paperwork.

A patent that Apple recently filed.

No one seemed to pay any attention to this unassuming and dull application.

But as a tech stock analyst, my jaw dropped.

See, I’ve always kept my ear close to the ground for new developments.

So when I saw this simple patent application, the puzzle pieces suddenly fell into place.

I realized a MAJOR shift is on the way.

As far as I know, I’m the first person to report on Apple’s “End of 5G” patent.

And I’m the first to point out the colossal opportunities this could create for tech investors.

When I correctly called 5G back in 2011, I was screaming from the rooftops about how investors could profit.

So let me just say now…

The investment potential here is even bigger.

Here’s what I’ve found out. Here’s how the end of 5G happens.

My research indicates Apple is going to space.

The tech giant is planning to launch thousands of satellites, allowing them to beam down high-speed internet.

A blazing fast wireless connection from the sky directly to your device — anywhere on the planet.

No need for towers.

No need for routers.

No need for expensive cell phone services from the major telecom companies.

As soon as 5G enters the scene, it’s already too late.

By then, the entire world is connected through Apple’s ambitious new project.

I know this sounds like something out of a science fiction movie, so let me lay out what I’ve found in my research about the coming “End of 5G.”

And really this all makes sense when you consider the shifts in Apple’s business model recently.

More and more, Apple is moving in the direction of providing services and not just hardware.

And although Apple keeps these matters very close to the chest…

The timing of his comments are no accident.

So it’s time to act fast.

But let me make this clear — when I’m talking about acting fast, I am NOT recommending investing in shares of Apple.

Sure, it’s a great company — but it’s already a behemoth. There’s only room for moderate growth at best.

When Apple announces Apple-Fi, the real winners will be the smaller companies Apple partners with…

When Apple makes their announcement — which could be within weeks — then these companies are set to skyrocket.

I’ve said it before and I’ll say it again.

But that only happens when investors pick the right STOCKS and move at the right TIME.

And that’s exactly where my research comes in.

My name’s Ray Blanco, and I’m one of the world’s foremost experts on tech investing.

Look, I really don’t like to brag. But I’m passionate about what I do, so forgive me if I explain a little…

I’m the guy who has successfully predicted boom after boom.

…from biotech to smart cars to the “Apple-Fi” revolution that Apple will soon announce.

I spend my days scouring the markets for the next big thing, traveling around the world to investigate opportunities, and talking with CEOs on the phone to get the inside scoop.

And I share my insights and recommendations in my Technology Profits Confidential publication.

Right now for my readers, I’m offering a free bonus report on “Apple-Fi”… and how investors can profit.

In my report, I list specific stock picks — the “real” winners poised to skyrocket when this announcement takes place.

I’m chomping at the bit to get this into the hands of readers while there’s still time for them to act.

So I’m giving my report as a free bonus to subscribers of Technology Profits Confidential.

As my private readers know, my “Apple-Fi” prediction is just the tip of the iceberg.

My research cuts through the noise and focuses like a laser on the best opportunities.

I give specific recommendations to my readers on what to buy, what to sell, what to hold – and when to do it.

My advice is to never stake more than an investor can afford to lose.

And there’s a chance that despite the evidence, my Apple-Fi prediction could still be off.

But if my interpretation of the research is right, this could be the biggest tech opportunity of the decade.

GET 12 MONTHS OF
Technology Profits Confidential for just $49…

…and get your free bonus report on the “Apple-Fi” revolution:

(You Can Review Your Order Before it's Final) 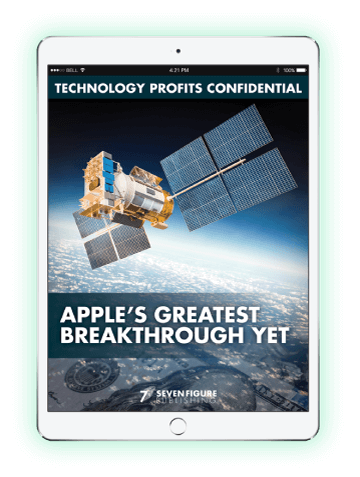 © Seven Figure Publishing, LLC. | 1119 St. Paul St., Baltimore, MD 21202, United States of America | Contact Us | Help | Terms and Conditions | Do Not Sell My Info No part of this report may be reproduced or placed on any electronic medium without written permission from the publisher. Information contained herein is obtained from sources believed to be reliable, but its accuracy cannot be guaranteed. All currency mentioned is in US dollars. If you are to receive an item by mail, it will ship within 7-10 business days once your item is processed.